In her lifetime, Kelly Clarkson has experienced countless standout moments.

Since being named the inaugural American Idol champion in 2002, the former cocktail waitress and telemarketer from Burleson, Texas has sold more than 25 million albums, notched more than 100 number one hits on the Billboard charts, collected some 71 trophies and even penned a New York Times Bestseller, with her first children’s book River Rose and the Magical Lullaby.

But, frankly, the multiplatinum pop star wouldn’t care if her obituary neglected to mention any of that. “I’ve accomplished a lot,” she told People in 2015, shortly after welcoming her first of two children with husband Brandon Blackstock, 43, “but I guess the biggest success I want is that whenever I die people will say, ‘She was so successful as a mother, and as a wife.’ That’s kind of my big goal.”

A decade ago she might have settled for the three Grammys. “I feel like I relied on my career a lot for my self-worth,” the 37-year-old admitted to People. “And now I’m more than that.” Along with experiencing what she calls “a certain level of peace,” Clarkson says that giving birth to daughter River Rose, 5, and son Remington, 3, has given her a sense of self-assurance she never thought possible. “I sound like such a tool but becoming a mother has made me next-level confident,” the “Love So Soft” singer, returning to NBC’s The Voice tonight for season 18, told Good Housekeeping. “I’ve never felt more empowered. I feel like my 20s were spent walking on eggshells making sure everyone felt loved and not really expressing my opinion.”

But now, with River and Remy and her stepchildren Savannah, 17, and Seth, 13, she simply doesn’t have time to be timid. “So you get straight to the point, “she says. “I go to bed every night and the list of what I’ve accomplished is astounding.”

Starting with even becoming a mom in the first place. Failed romances with Idol also-ran Justin Guarini and musicians David Hodges and Graham Colton left the star wondering if she’d meet her match, let alone start a family of her own. “I’m very much a gypsy at heart, and I just didn’t think I would find someone who understood that about me,” she explained People. “And it’s a very selfless thing to be a parent, and my line of work can be a very selfish thing. I didn’t want to bring someone into this world and screw them up.”

Then she connected with Blackstock, a manager for Rascal Flatts and the son of her own manager Narvel, in late 2011. It was, as she once sang while fighting back tears on the Idol stage, something she couldn’t believe was happening to her. “I never felt like, honestly, sexually attracted to anybody before him,” she told the audience at a SiriusXM performance in 2017. “There was something about him. I honestly thought I was asexual—I’d never been turned on like that in my whole life. I was like, ‘Oh that’s that feeling…OK! That’s what they were talking about in Waiting to Exhale. I just got it. I just didn’t have a clue.”

As they marked their engagement a year later, the discoveries kept coming. Bonding with Blackstock’s kids, from his first marriage to Melissa Ashworth, made Clarkson realize yes, actually, she did want to have a baby with the first man she truly fell in love with.

Any effect her estranged relationship with her own father may have had on her—”It’s hard to miss something you never had,” she’s said of her dad’s decision to lose touch with her after divorcing her mom—was erased by Blackstock’s actions. “Watching my husband love on his daughter all the time you know, go to her events and just be there and like be present is like hard to watch but beautiful to watch,” she confessed during a 2016 On-Air With Ryan Seacrest interview. “I know that my kids are going to have that.”

Because within one month of marrying Blackstock in front of a select group, including his children, at Tennessee’s Blackberry Farms in October 2013, she announced she was expecting.

She had hoped to wait longer to reveal her news, but felt the need to explain herself when severe morning sickness—”It’s all day and all night”—forced her to bow out of a work commitment. “I didn’t want people to think I was cancelling because I’m lazy or something, so we just told people,” she said.

And true to form, she continued telling it like it is throughout her pregnancy. Because for Clarkson, it wasn’t a joyful journey of creating new life, but rather a time filled with nausea, vomiting and such severe dehydration she had to be hospitalized to receive IV fluids. Even worse: After welcoming River in June 2014, she temporarily lost her voice, sending into her in a panic as she considered career options. “I literally had a moment where I cried and drank wine all day,” told ET Canada. Basically pregnancy, she told People, “was literally the worst moments of my life.”

Thankfully, motherhood has been full of high points. Though Clarkson is officially done have children—”Those tubes are gone!” she joked on KTU’s Cubby and Carolina in the Morning, noting she had Blackstock get a vasectomy during her second pregnancy with Remy—she gushed to People about how much she cherishes being a mom: “I love going to games. I love the homework. I love the challenge of helping mold someone’s life.”

Because as it turns out, Clarkson is full of motherly wisdom.

Take the time her teenage stepdaughter Savannah revealed she was being bullied by an adult woman. Rather than coddle her through the moment, the singer—no stranger to battling online trolls herself—dished out some truths designed to help Savannah deal with any harsh realities she might face in the future.

In fact, if anything, Clarkson worries about making her kids’ lives too comfortable. Growing up as the youngest of three in a tiny apartment with teacher mom Jeanne Taylor, “We were so poor—I mean living paycheck to paycheck,” she told Redbook last November. “I think it was very good for me to see that, in a sense, because I am really appreciative of what I have and what I work for.” 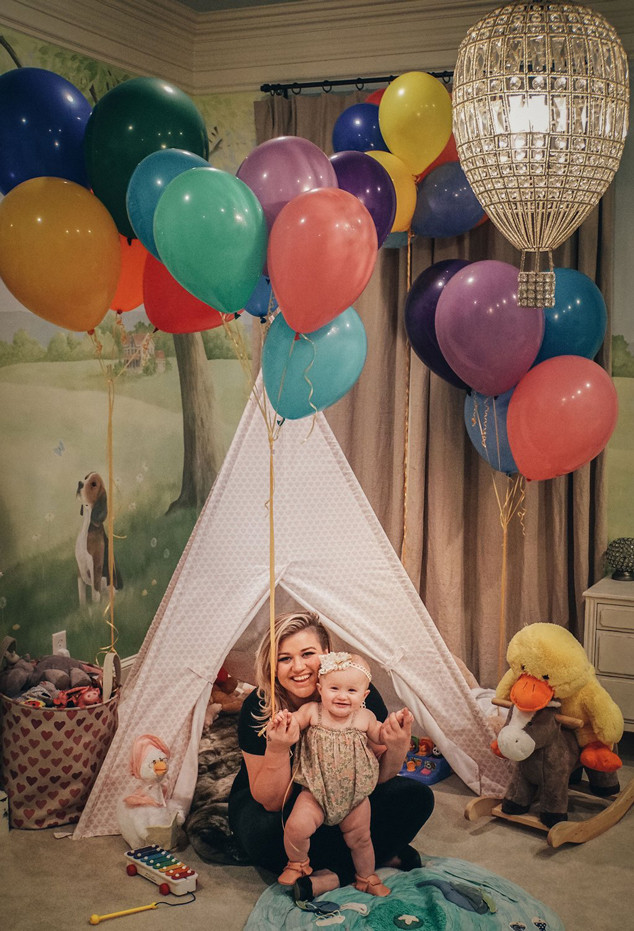 With her estimated net worth clocking in at roughly $28 million, she worries her children won’t truly understand the value of the dollar. “That’s my fear with my kids, especially my younger two, that they won’t experience some of the hardships that helped mold my husband and I into these very independent beings that can handle quite a bit,” she told the mag. “But I try to show them how to be appreciative and respectful and take them to things where they can see other people that don’t have the benefits that they have right now.”

And it helps that they see their mom working her tail off, juggling her gig on The Voice with promoting her music (her 2019 Meaning of Life tour was the first in four years because “We have four kids,” she joked to E! News, “so it took a minute to get here again.”) And, of course, there’s The Voice and her latest venture, The Kelly Clarkson Show, that has seen her charm audiences all over again with her frank celeb chats (why wouldn’t she get very real about breastfeeding while talking to new mom Kate Upton?) and Kellyoke cover songs.

Clarkson cops to struggling with some of the inevitable guilt that comes with working outside the home. “If you’re a mom, you want to be with your kid everyday. You don’t want to miss a moment, you want her to need you and want you and not want somebody else,” she explained to Redbook.

Fortunately, she has a bit more flexibility than most, having Remy and River sometimes tag along to her talk show set. The arrangement means that sometimes they get to interview their heroes (their interview of Aquaman star Jason Momoa is one of the purest clips on the Internet) but more importantly, as Clarkson told the outlet, it’s crucial for their kids “to see that a woman is capable of kicking ass while also being a kickass mom.” 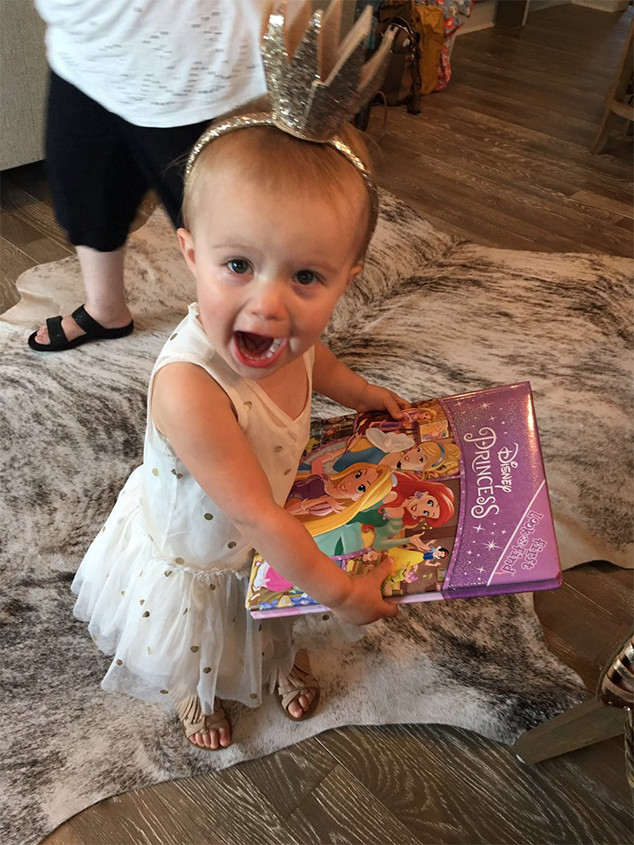 And Clarkson, who eschews baby talk preferring to speak to her children as adults—”My mom did that to me, and I turned out all right,” she’s said—knows demonstrating that will go a lot further than just telling them to be strong. “I try to be a confident female for her,” she says of little River, “and I believe actions obviously speak louder than words, it’s an old saying but it’s very true.”

She’s certain Blackstock’s behavior has a positive effect as well. Previous boyfriends, she’s said, were “intimidated” by her strength, but she says Blackstock finds the fact that she’s “a pretty badass female” to be a turn-on. And it’s crucial for all of their kids to see that.

At just five years old, she says River is paying attention. Calling the tot “very bold” and “progressive”, she recently predicted to People, “She will run a company one day because there’s no way she’s gonna work for anyone. She does not heed to advice very well. She’s just very ballsy, which is awesome.”

But while she definitely doesn’t want her daughter to be a pushover—unlikely considering her self-assured mom turned down several recording contracts pre-Idol because, “They would have completely pigeonholed me as a bubblegum act,”—she’s careful to make sure she’s not raising a brat.

If that means River getting knocked down a few times, as her younger brother learns how to fight back to her taunting, so be it. “We did tell her, ‘Girl, he’s gonna get older and he’s gonna start pushing back and doing stuff,’ and literally it was like two weeks later, older happened,” she told Ellen DeGeneres last spring. While she’s not encouraging physical fighting, “If she knocks him, I’m like, ‘Well, you asked for it.”https://www.eonline.com/”

Because it’s crucial for her that her kids know they’re not going to always get their way in life. “You also want to have an adult that doesn’t think they’re right all the time,” she told People. “But toddlers are just so egocentric and it’s just a stage that some people don’t grow out of, let’s be real. But mine will.”

In return, they have kept her in check as well.

“They say something and you’re like, ‘Damn.’ They’ll call you out. And they teach me. I know it sounds really silly, but kids teach you to be a better human because they’re watching every moment. Not only me at home, but me sitting here with y’all,” she told reporters during The Voice‘s panel at the 2018 Winter TCA Press Tour. “I think when you’re younger and, especially in this kind of industry where everybody’s always applauding you or even if they’re talking bad or good, they’re still talking about you. It’s so hard to not drink your punch, and I think a lot of people fall prey to that.”

Clarkson, though, has her eye on a different prize and it has little to do with actual physical trophies. “After becoming a mother, the amount of s–t that you get done, you’re so impressed with yourself!” she told Refinery29 in 2017. “It’s the most empowering feeling, because it makes you want to worry about the pettiness and trivial things a lot less.”

What to Watch This Weekend: Our Top Binge Picks for May 16-17